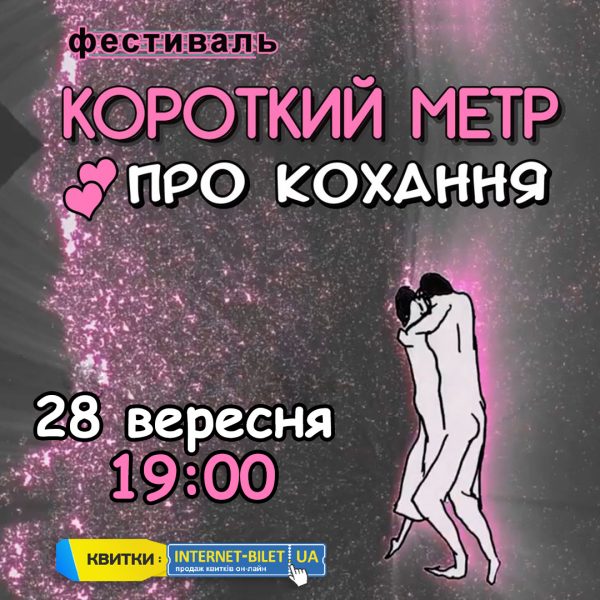 September 28th at the Fabrika.space festival “SHORT METER ABOUT LOVE”

Love is a difficult category, often incomprehensible, but always beautiful!
Love fascinates, excites, pushes for majestic or absurd actions, calls you on the road, forces you to determine life priorities and twists everything into complex exciting plots… There are several such interesting stories in the collection of the festival “SHORT METER ABOUT LOVE”.

SPEED DATING
Comedy, animation, USA, 11.10 min.
Director: Megann Artis
Cast: Baiz Buzan, Russ Williamson, Michael B. Woods
In search of the man of her dreams, sweet and outspoken Ava decides to visit a quick dating club. But strange interlocutors make you wonder is it really so bad to be alone…

LOVE ON BALCONY
Romantic comedy, animation, USA, 3.52 min.
Directors: Joshua Hong Wu Chun, Kun Yu Ng
The enraged old man is doing everything to destroy the romance of the neighbors… But love has its advantages…

ILLNESS OF LOVE
Romantic Comedy, USA, 4.43 min.
Director: Kevin Mark Lacey
Cast: Joshua Cameron, Tatum Langton, Heather Mone
Will the young man be able to find the girl of his dreams despite attempts to catch up with any girl?

UNLOCKING CHARLIE
Drama, Ireland, 13.14 min.
Director: Stephen Creeley
Cast: Grace Fitzgerald, Tom Maguire, Clyde Moulds
Everyone has the right to love. Even one whose mind is clouded by terrible fears and painful imagination.

ABOUT SOCKS AND LOVE
Comedy, animation, Slovakia, 6.52 min.
Director: Michaela Kopikova
A short film about love, but mostly about socks.

OPHELIA. SETTING LOVE AND PRIVACY
Romantic comedy, animation, Germany, 3.51 min.
Director: Bin-Han
The cute gigolo Hubert has a bubble above his head, in which his thoughts are floating. And absolutely everyone can see them. And since Hubert mostly thinks about naked women, this puts him in trouble…

PLASTIC
Romantic comedy, USA, 5.04 min.
Director: Jamie Mac Keller
Starring: Rose James, James Rothcell, Sebastian Synovets
A young girl notices that the guy next got into trouble. She is trying to help him, and this is the beginning of a romantic adventure.

CHICKEN OR EGG
Comedy, animation, USA, 3.20 min.
Director: Christine Kim, Elaine Wu
Tastier food than chicken eggs for Pork was nothing. But when he fell in love with the hottest Hen in the city, he faced an extraordinary question – what to choose?