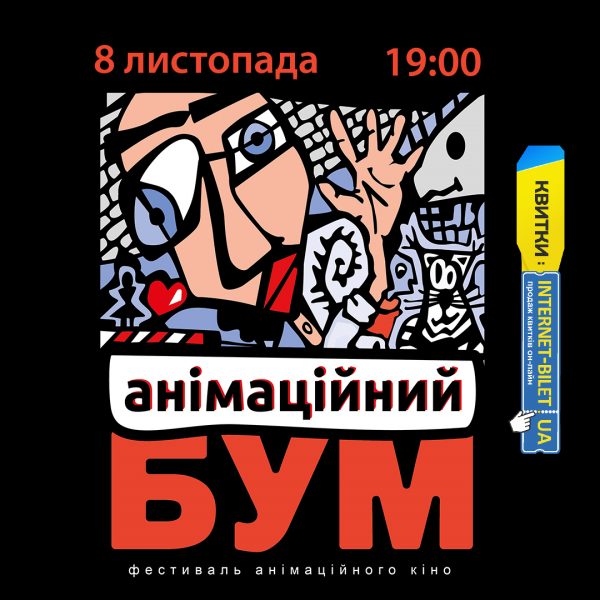 8th of November at the Fabrika.space ANIMATION BOOM FESTIVAL

IN THE HALL free landing !!!

Autumn is not a reason to despair, hide short shorts and tune in to autumn melancholy. Let’s add even more flowers these days and stir up the real September animation movement!

The program has a shockingly cool animation from different countries, which will take you out of reality and throw you into a world in which there are no frames!

See you at Fabrika.space! Without a good mood and inspiration, we won’t let out of the audience!

Two nuns are late for the evening mass, for which they are shown the door. The punishment is to remove the temple. In the course of work, girlfriends accidentally break the sacred relic. Full of regret, they are trying to fix the mistake, but everything is going awry. Unexpected events drag them in, almost bringing them to sin…

Roger and Billy are two penguins wandering by boundless icy surfaces. In a hidden ice cave, they find crates full of chili with an unusual property…

1920, Jacques, traumatized by the war, lives a hermit, looks after a cemetery. One day he meets Henry – a young soldier who rose from the grave…

Safety rules are important, but when something went wrong in flight, you can afford more…

Lulu graduated from the Academy of Heroes, finally he can demonstrate his abilities to a society that has always underestimated him. He is preparing for an epic journey. Killing a legendary and very scary dragon is a worthy challenge for a real hero. But, to his great disappointment, a caring grandmother wants to accompany her dear grandson. Full of adventure and dangers, blood and beautiful women, the journey of a free knight turns into a family trip, which will “make” Lulu’s nerves well.

Do your socks disappear too? Have you ever wondered where they go and what their future fate is? The film “Made in France” will explain everything to you.

Four strange friends travel to the tropics. But something is going wrong…

Paul Connolly is an old cop. Going to work early in the morning, he hears the call of the walkie-talkie, which carries him into his memories. A difficult journey with your own life and career is a test that must be passed.

A colorful mix of pop culture, classic film, online and music links, “Monkeys” from directors Nicopicto, Nicolas Lezafre and Charles Blanchard depicts a world in which our furry genetic relatives fully adopted the smartphone and all the dubious manners that accompany it.

Tim Sables’s poem comes to life in the Hannah Jacobs animation. As part of the TED-Ed project “Poetry Talks About It,” the film uses visual metaphors to transfer words from pages to screens in winged images that fly from one thought to another.

Three funny rats seek food on a desert island, avoid the evil predator, work on themselves. And all this in the framework of scientific research…

The main character, an elite cupid, can not find the perfect man for Kate. But one day there is a great opportunity to find exactly that…

Exchange of views in the subway… How many opportunities fly by us every day? Darrell will do everything not to lose today’s chance.

15. The challenge for the non-punctual

Ezra was late for the evening train. An abandoned Rubik’s cube is trying to attract her attention. Someone has to fold it. For example, Ezra…

Two monsters are looking for delicious for lunch. Not all incidents in their path will be pleasant…

It was supposed to be the usual working day of a dubious doctor. But events are gaining unpredictable momentum when one of the patients decides that the doctor should try the medicines prescribed by him…