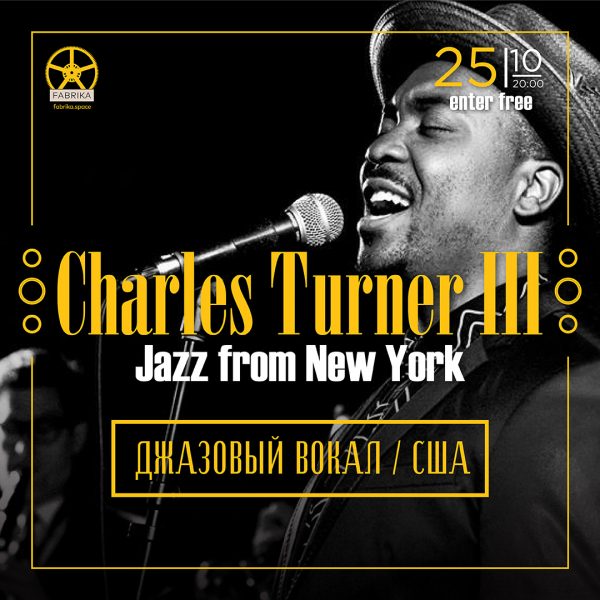 On October 25, we will have one of the best jazz vocalists of our time – Charles Turner III (USA).

Give yourself an evening of good old jazz in the best traditions of the golden era of “great romantics”. The hits of Frank Sinatra, Fats Waller, Louis Armstrong and other legendary performers will be performed by one of the best jazz vocalists of the new generation, Grand Prix winner Duke Ellington Jazz Vocal Competition, Monterey Jazz Festival and Shure Montruex Jazz Award – Charles Turner III.

“Voice of love” – this is what his fans in California call it. Girls adore Charles for their radiance and sunny timbre, and men for an example of how to be and how to sing in order to captivate women’s hearts.

The holder of a rare voice – a lyrical tenor with a unique, unlike any other manner of performance, Turner quickly attracted the attention of the American jazz press and radio stations. Behind his shoulders are performances with multiple Grammy owners Bobby McFerrin, Terri Lyne Carrington, Dave Samuels, Dee Dee Bridgewater, Joanne Brackeen and other stars of modern jazz. His debut album was produced by multiple Grammy winner, iconic drummer Ulysses Owens.

We are waiting for you on October 25 at Fabrika.bar to enjoy modern American jazz!
The concert starts at 20:00.