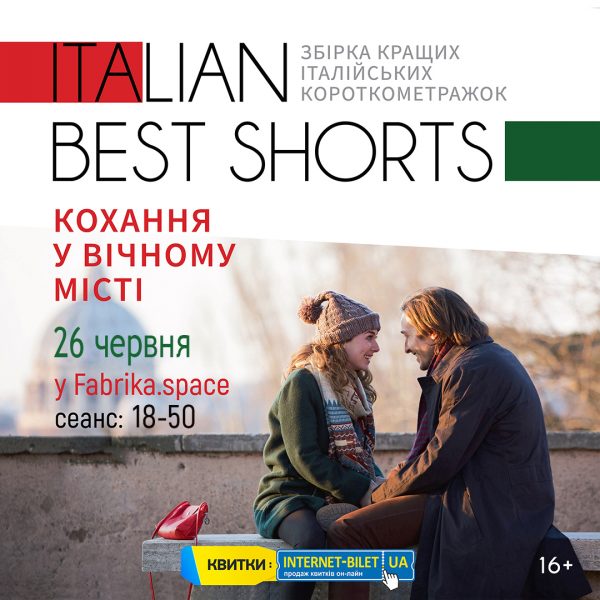 June 26th at Fabrika.space
ITALIAN BEST SHORTS: Love in the Eternal City
a collection of the best Italian shorts about love.

In order to prevent and prevent complications of the epidemic situation due to the spread of coronovirus diseases (COVID-19), all recommendations will be accepted during the event according to the decree of the Chief State Sanitary Doctor of Ukraine No. 35 dated 06.06.2020
– Before the start of the show, temperature screening will be done to the audience.
– All visitors must wear respirators or face masks covering their mouth and nose throughout the event.
– accommodation of visitors with a distance of one and a half meters from each other.

Session: 18-50
Ticket price: 100 UAH.
Age category: 16+
Duration: 100 minutes
Trailer: https://www.youtube.com/watch?v=QDZ2Tyr5WXE
Films voiced in Ukrainian.
The almanac “ITALIAN BEST SHORTS: Love in the Eternal City”, assembled from 7 of the most striking Italian short melodramas and comedies, winners of various Italian film festivals, is a declaration of the beauty of human relations with the world, with one another, with love.

Display Program:
-1-. “Boy with a finger” Cristiano Ananias
A touching and allegorical story about a man for whom there is only a moment “here and now”. The film has participated in more than 120 Italian and international film festivals and has received 45 awards, including the most prestigious awards at the Queens Film Festival in New York and the Scottish Film Festival in Edinburgh. Finger Boy has also been featured on the Golden Globe Shortlist for Best Italian Short Film of the Year.

-2-. “Tomorrow is starting a new life” by Monica Dugo and Marcello Di Noto
A satirical comedy about all of us, about how dependence on gadgets can replace simple and such important human communication. The main role is played by the world-famous director Giuseppe Piccioni, multiple winner and jury member of the Venice Film Festival, winner of many awards “David di Donatello”, nominee for an Oscar for the best film in a foreign language.

-3.- “Date” of Ilenia Politan
Witty reflections on how often we do not say out loud what is on the heart and what this leads to in a relationship. “Date” is the directorial debut of the famous Italian columinist, the leading weekly column La Mamma al Cinema (“Mom in the Cinema”).

-4-. “Love in the Eternal City”
The main short story from the screenwriter of the comedy hit “I Want and Jump” and the winner of the David di Donatello Prize, Valerio Attanasio, was released in English-speaking countries under the title It’s a wonderful life – this is a romantic walk in Rome, which will present lovers who dream of marriage , several strength tests. The film took part in more than 20 Italian and international film festivals, was named the best short film of the year at film festivals Giffoni Film Festiva and Video Festival Imperia both received the Audience Award at the New Movie Club Film Festival Palestrina. Starring actor Dario Aita was named Best Actor of the Year at the Roma Creative Contest, female lead Nina Torrezi – Best Actress of the Year at Festival Corti Senza Frontiere.

-5-. Rocky Daniele Pini
In the small heroes of the short film, each viewer will be able to recognize themselves – this is a heart-touching story of imaginary friendship and first real love. The film won the important Italian Premio Rai Cinema Channel Award “for a breakthrough in the short film genre and an original story about the transition from adolescence to adulthood, with all delicacy showed the deep feelings of young people of our time.”

-6-. The Cycle by Francesco Bruni
A short comedy melodrama about a young girl who came for an interview, but found something more important instead of work, viewers will see for the first time a film shot by the Roman Experimental Cinema Center, the Centro Sperimentale di Cinematografia di Roma film was not shown even in Italy, its inclusion in the almanas ITALIAN BEST SHORTS: Love in the Eternal City ”- world premiere.

-7-. Crowns the almanac of the melodrama “The Most Beautiful” Alessandro Capitan, who won the Italian Oscar last year, the David di Donatello Prize as the best short film.
Having quarreled with the guy, Veronica closes in the club toilet, and even her friend can not get her out of there. Hearing tears, a guy from a neighboring booth speaks to her. By voice, he falls in love with Veronica, but is he ready to see her? .. the bright star of Italian cinema, Jusi Lodi, played a small story of great love that will not leave anyone indifferent.