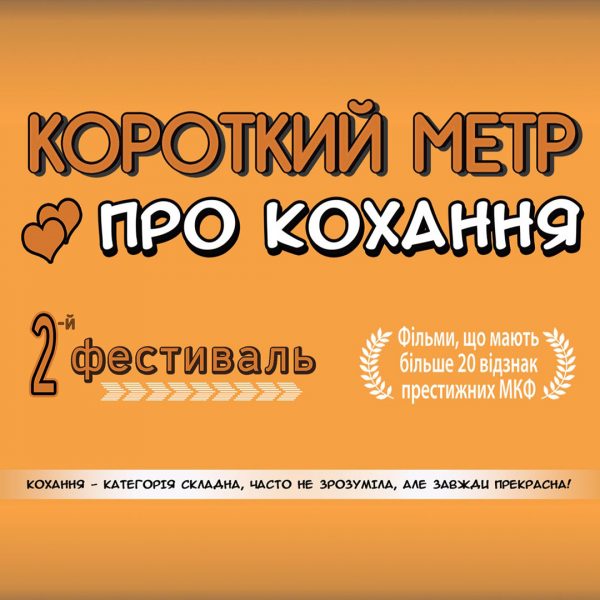 11th of January at the Fabrika.space Second Festival “Short meter about Love”

IN THE HALL  FREE LANDING!!!

Love is a difficult category, often not clear, but always beautiful! Love captivates, excites, pushes on majestic and ridiculous things, calls on the road, makes you determine life priorities and twists everything into complex exciting plots…

THE ART OF LOVE

Believe in love at first sight? During a walk in the park, a lonely photographer meets an unusual girl. He wants to definitely find a way to her heart…

Owen, after her mother’s funeral, goes back to the cemetery. By chance, by mistake, his acquaintance with Maura begins here … The story of loss, love and life.

DATED BY THE FUTURE

The artificial intelligence super system discovers that Daniel is dreaming of one of the girls in his virtual class. The only way she knew the car convinces the guy to go on a date, because otherwise, according to statistics, he will simply “kill” himself. This is a strange order for someone who has not left their home for 42 days, who is happier to be at home with their latest technology…

After one stormy night, Emily realized that she was pregnant. But is her chosen one suitable for the role of father …?

Grandmother gives Jimmy a strange box of luck on Chinese New Year. Opening it, the guy should be in the center of interesting events and finally get close to Katie…

It’s difficult for Tanya to put up when the guy she met loses interest in her. She decides to take revenge.

The mythical apathetic little man who fulfills desires lives under the fountain. But once he is forced to rise to the earth in order to fulfill the desire for love…